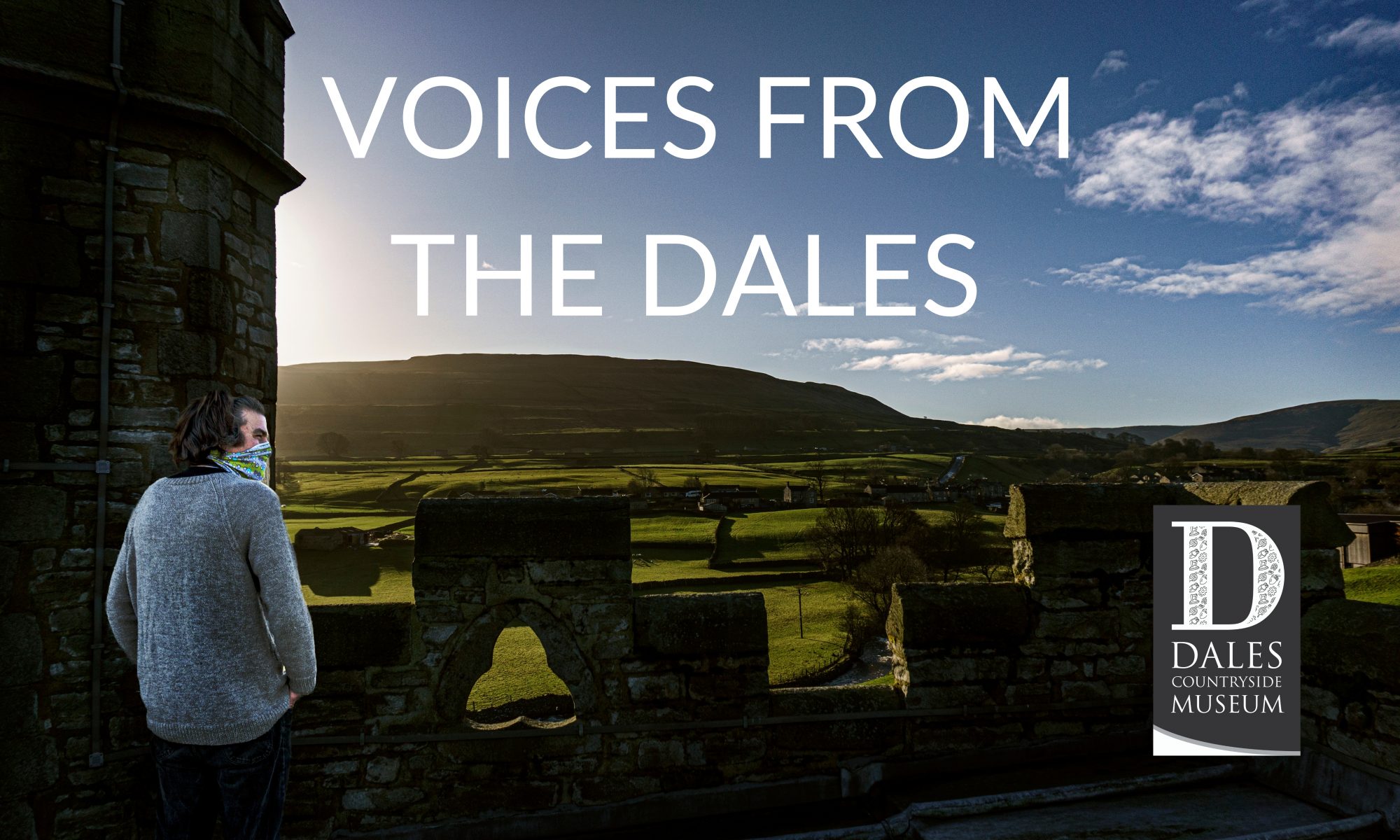 Journalist Andrew Fagg. from Hawes, made the podcasts during the Coronavirus lockdown of early 2021 using clips from our oral history collection and his interviews with local people.

Episodes One and Two on schools coincide with our next special exhibition, ‘Story of Schools’, which will open – subject to lockdown restrictions easing – in May 2021.

Episode One – Voices From The Dales Schools pt 1: A cockerel down a chimney, school closures, sex education and a ‘Roman toilet’ are discussed in Episode One of Voices From The Dales.  Hear the voices of John Waggett from Gunnerside, Joan Fawcett and Christa Fagg Rawlence from Hawes, Sally Stone from West Burton, Norman Guy from Muker, Enid Lundberg from Arkengarthdale and Barbara Buckingham from Reeth.  Also meet Mary Burrow, the woman who devoted her life to one Dales school.  It is presented by Andrew Fagg from outside Hawes Primary School in Upper Wensleydale and was recorded on 5 March 2021:

Episode Two – Voices From The Dales Schools pt 2: Clogs, snow, the bus driver and the ‘kiddy catcher’ are discussed in Episode Two of Voices From The Dales.  Hear the voices of Kit Calvert, Joan Fawcett, Eric and Vera Alderson and Reggie Fagg Rawlence – all from Hawes – as well as John Waggett from Gunnerside, Norman Guy from Muker, Jennie Sunter from Keld, Brian Sunter from Low Row, Eleanor Scarr from Bainbridge, and Allen Kirkbride from Askirgg.   It is presented by Andrew Fagg from outside Hawes Primary School and was recorded on 5 March 2021:

Episode Three – Voices From The Dales… Chapels: “The energy is no longer there,” said the Methodist minister in Reeth in 2016, as another Dales chapel closed.  As journalist Mike Amos reported, a way of life was quietly disappearing. Chapels were at the heart of village life in Wensleydale and Swaledale for around 150 years, but decline set in during the second half of the last century.  And yet in half a dozen places such as Gayle and Gunnerside the Methodists are ‘still alive’, as they like to say.  In this episode hear Walden preacher Rowland Dent, as well as Jean Cockburn from Aysgarth, Joan Fawcett from Hawes and the late Richard Dinsdale of Gayle.  It is presented by Andrew Fagg from outside West Burton Methodist Church and was recorded on 4 March 2021.

Episode Four – Voices From The Dales… Bard: John Thwaite (1873-1941) was a Wensleydale dialect poet who wrote about the natural beauty as well as the ordinary working class people around him.  He worked as a grocer in the town of Hawes.  Some 30 years after his death a group of people in Wensleydale recorded his poems on cassette tapes.  In this episode hear two poems read by Jack Fawcett:  ‘The Quarryman’s Cross’ and ‘T’Auction Mart’.   It is presented by Andrew Fagg from Hawes Main Street and was recorded on 6 March 2021:

Episode Five – Voices From The Dales… Museum Makers: Marie Hartley and Joan Ingilby founded a museum and brought pleasure to millions of people through their popular books on the Yorkshire Dales.   What started their love affair with the Dales?  How did they encourage Dales folk to tell their stories?    And what role does museum they created, the Dales Countryside Museum, have today?  In this episode hear the voices of Marie Hartley and Joan Ingilby, Guy Ingleby of Littondale, Taylor Dinsdale from Gayle, and Fiona Rosher, the current Museum Manger. It is presented by Andrew Fagg from outside the Dales Countryside Museum and was recorded on 1 March 2021:

Keep an eye out for a second series, Voices From The Dales…Farms.